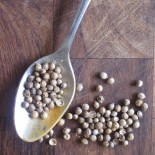 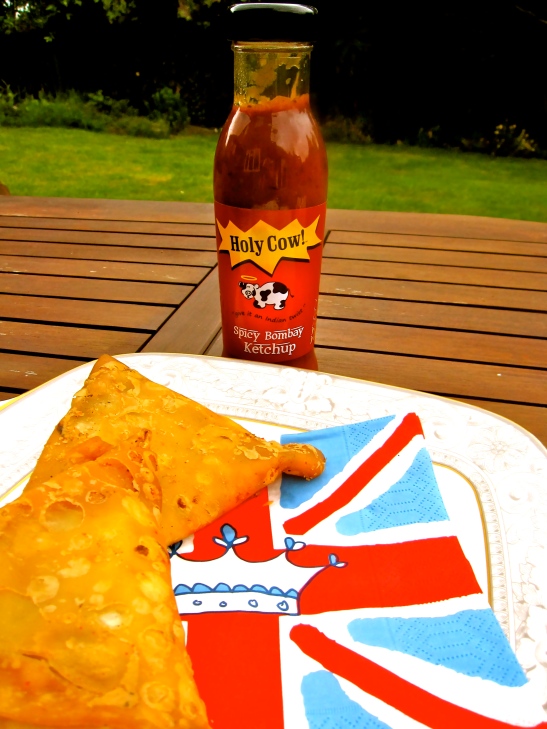 Our neighbours have already got their bunting up, getting ready for our local street party to celebrate the Queen’s Jubilee. How jolly exciting is that? It’s all looking rather tipity top. Spiffing, in fact. And one rather feels, suddenly, the need to speak as though one’s in the Famous Five, or in an P.G. Wodehouse novel. Golly, right, what ho then, chippety chop, lets get the dashed show on the road!

Indian’s love an excuse for a celebration, not least because it involves food, food, glorious British-Indian food!

We’re getting our contribution to the party ready with Two British classics in honour of the Queen’s 60 years on the throne..Hmm.. Wonder if she likes her Samosas? Well that’s what we’re serving up anyway, and I’m sure she’d be polite. It’s perfect garden party food after all. Served with our own British Classic Holy Cow! Spicy Bombay Ketchup for dipping. (You can order this one online).

Samosas are a classic Punjabi snack that have become as British as the Cornish Pasty, or Jam and Bread!

We’re lightly frying our Samosas in sunflower oil, but use vegetable oil if you don’t have that. Ours are stuffed with a classic simple filling of softened potatoes and peas (with a little chilli – to taste, salt – to taste, and 1 tsp crushed coriander seeds).

The Method – To make about 10 -12 medium sized Samosas

1. Boil 2 medium sized potatoes until just soft, and then peel skin and lightly mash up. (You want lumps for texture – its not like mash potato).

2. Heat a teaspoon of olive oil in a frying pan, and throw in 1/2 a cup of frozen peas. Cook for a few minutes until the peas de-frosted and a little soft.

3. Throw in the mashed up potato and add all the spices and seasoning (these do taste really great with chilli so go for it!). Give it a little mix until all the spices have coated the peas. There’s no more cooking just mixing well.

1. Take  1 cup of plain flour, a pinch of salt, a table spoon of oil, which you mix altogether with a little water until you get a firm dough.

2. Take ping-pong sized balls of dough and roll our into a circle on a lightly floured board. The pastry should be thin (2-3 mm) if you can.

3. Then cut the circle in half and and pick up one half and hold in your palm. Your going to fold over the half circle into a cone shape and seal the ends using water. (Take the corner along the straight edge of the pastry and twist over. The rounded edge becomes the opening where the filling goes in. Dab both sides of the pastry, that are going to stick together, with water and squeeze them down  – right down to the corner so you don’t loose any filling in the frying.

4. When you have a cone, take a table spoon of filling (not too much or your cone will split! and not too little because no one likes a sad samosa) and fill up the cone. Seal the top of the cone with a little water around the edge of your pastry and squeeze together or fold over to make sure its sealed.

Keep going with the cone making and filling – lining them up on a tray ready to be fried.

1. Take a litre of sunflower or vegetable oil and heat up in a wok or deep pan. Make sure your oil is not to hot – not smoking. When the oil is hot, gently drop in a few samosas at a time and cook until your pastry is a lovely golden brown.

2. Take out of the oil, making sure you let the oil drain away. You can rest the samosas on kitchen paper for a bit to soak up any excess.

1.Serve while they’re still hot  – They’ll be gone in minutes. So golly, don’t forget to coordinate and put the kettle on. Get a good proper brew of cha on. Best China, of course, in a teapot.

3. We’re serving our Samosa with lashings and lashings of Holy Cow! Spicy Bombay Ketchup, washed down with a proper cuppa.

God Save the Queen!  – and have a great weekend everyone! 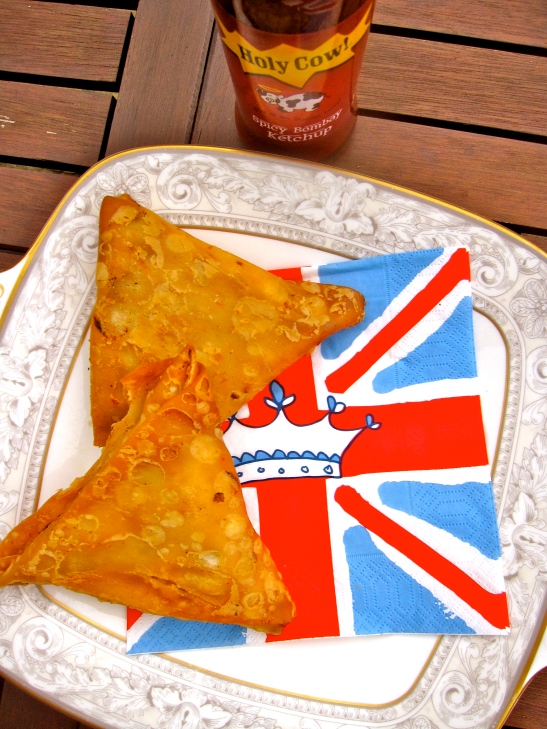 Enough from me, what do you think? Cancel reply